Hung was born in Vietnam during the infamous Viet Nam war.  As a kid, he loved kites and used to build kites by himself using bamboo and paper.  Kites were always his passion throughout his life.  As a kid he used to fly a small single line kite to drag himself and friends in a floating basket across a small pond and then ran back upwind and did it again. So "kite sailing" was always in his blood even thought it was not quite "controllable" and was straight down wind back then! Floating basket?  Do an image search on "floating basket" or click here to see one.

In Canada, Hung became a somewhat successful business man. Having sold one of his companies in summer 1998, he decided to take a year off and traveling around the world.

Hung briefly heard of Kitesurfing in 1998 and read a brief review about kitesurfing in the Windsurfing Magazine but did not give it much thought until he saw some strange looking inflatable kites in a windsurfing shop in Paris. So on the spot, he decided to buy 2 kites (5m and 8.5m Wipika Classic) and had them shipped to Ottawa, Canada while he continued on his trip in Europe.

Hung came backed to Canada in Sept 1998 and started learning kiting, kitesurfing, kiteboarding, kiteskiing, flysurfing or whatever-you-call-it using the kites he bought in Paris and his modified sailboard. Back then nobody knew which name for the new sport would stick. Now, it looks like both the names kitesurfing and kiteboarding will likely be around (just go to Google, do 2 searches for kitesurfing, kiteboarding and then count how many matches for each).

1998 was the first time Hung was introduced to power kiting and the Wipika Classic 5.0 really impressed him. As winter in Canada started making the day shorter, Hung needed to go some place where he can practiced kitesurfing during the winter months. So Hung decided to book a trip to Carabete (where he normally went windsurfing in the past) and got in touch with Jan Pina of Santo Domingo, Dominican Republic via the legendary Kitesurf group. Jan had bought a Wipika 8.5m via mail order in July 1998 and had been learning it ever since using his modified sailboard.

To prepare for his trip, Hung contacted FOne and tried to get a proper kiteboard. FOne referred Hung to ConceptAir in Quebec as apparently Raphael Salles (owner of FOne) has visited ConceptAir in the past and at that time had some relationship with ConceptAir. Hung contacted Michel Montmigny (former kiteskiing world champion) at ConceptAir and got the legendary FOne 230, serial number 230085 (Model 230, Serial Number 85).

In November 1998, Hung rented a beach front house at the west end of Carabete (between Carabete and the "future" Kite Beach) and invited Jan to come visit him from Santo Domingo. The two kitesurfers instantly became friends and decided to learn together. While practicing kiting at Carabete, the two friends got a lot of attention from the curious windsurfers and also met Terry, the first kitesurfer at Carabete. Terry had been kiting at Carabete on and off since Jan 1998 (few months before Jan and Hung). The trio instantly became friends and share the learning experiences together.

By Christmas 1998, Jan came back to Santo Domingo and invited Hung to came down to see him and visit one of Jan's vacation house at Salina. That was a wonderful trip, the two friends improved drastically in a very short period of time and in the end, they dreamed about opening up a kitesurfing school and center at Salina. Due to this plan, Hung decided to keep a learning log to eventually write an instruction manual for the school. Hung's learning log was eventually published at the section Log of the Kitesurfing School web site.

Hung went back to Carabete and kited there until Feb 1999. Jan came up and visit Hung regularly during the period. The two friends had lots of funs kiting together and Jan even made a new proper kiteboard based on Hung's FOne 230 but smaller.

When Hung came back to Canada, it was still in the middle of winter and he received an invitation from Cory Roeseler, the inventor of kite water skiing for a lesson trip in Baja Mexico. Hung took up the offer and on the same trip, also planned for a trip to Hawaii and Australia to visit friends and relatives. Hung met Cory and his wife at Baja in April 1999 and was extremely impressed with Cory's performance on water. Unfortunately, the wind did not cooperate so Hung did not get fully acquainted with Cory's frame kite and the Mosquito board.

Hung moved on to Maui, Hawaii, the last 2 weeks of April 1999 where he met a number of now famous kiters such as Mauricio (worked at Hawaiian Proline, now Airrush, at that time), Chris Gilbert of Hawaii High-Tech, Chris' girl friend (now wife), and a couple other kiters. Hung also had a chance to watch Flash in action. Hung was very impressed with Flash's amazing tricks and high jumps over the waves at Maui's north shore.

Back then, there were only a handful of kitesurfers at Maui. There, Hung was introduced to the "smaller" directional kiteboard of size 5'6" or so. Hung even rented a small kiteboard at High-Tech but the wind was howling 30 knots constantly in the two weeks while he was there so Hung ended up spending most of his time in Maui blasting the ocean with a small slalom and a wave sailboards.

After stopping over at Hawaii, Hung made a tour to Australia to visit friends at the Gold Coast, Sydney and Melbourne. Before the trip, Ian Young, the first kitesurfer of Australia invited Hung to came to Adelaide to attend the first Australian Kitesurf Challeng. Hung took up on the invitation and went to Adelaide. There, Hung spent a couple days watching competition and discussing kiting with all the pioneer Australian kitesurfers: Ian Young, Alex Gillian, Ben Merkenhof, Mat Colefax and Dave (Kiteboard Headquarter).

At the end of his 1 year vacation, Hung took his family to Tampa Bay, Florida, US for an end of summer vacation before his kids started school in early September 1999. Via the legendary Kitesurf Group again, he met Josh Young, the first kitesurfer of Tampa bay and probably of Florida. Josh had been buggying a couple years earlier and introduced Hung to the various foil kites. At Tampa Bay, Hung mail ordered his legendary light wind foil XXXL and together Hung and Josh used the XXXL in very light wind on Josh's converted surfboard...

Hung and Roberto Spitale in Costamba, July 2000
(Roberto is Dr. Kite who saved Eric Hertsens' life in 2005)
(The kite in the background is the legendary Naish AR5)

In the latter years, Hung explored the whole Dominican Republic, kited at places such as Costamba, Luperon, Juan Dolio, etc., and many other kiting destinations in the Caribbean such as Varadero, Cuba; Mayan Riviera, Mexico; also Haterras, SandBridge, US, etc.

Via the internet, Hung rediscovered the windy town of Mui Ne, Phan Thiet in Vietnam (which he remembered very windy based on his childhood memory) and sent out a legendary post to the Kitesurf Group in July 26, 2001. A few years later, Mui Ne, Phan Thiet is now a kitesurfing paradise in Vietnam...

In this historic Kitesurfing School photo gallery, we'll try to show some last century photos (back in 1998, 1999) so you can put some faces to the names of the pioneer kitesurfers mentioned in this web site. We'll also include some modern famous kitesurfers and manufacturers.

This is what Cabarete Bay looked like "last century", back in 1998 (no kite on the sky except for those of Hung, Jan and Terry).

Hung Vu, Antonio Esteban and Jan Pina are checking out Jan's new 220 cm kiteboard, the first kiteboard ever made in Dominican Republic. Dan, the future kitesurfer is practicing with Hung's FOne 230 (Carabete Dec. 1998)

Hung is holding the kite while Terry is trying to untangle the lines. Dan, the future kitesurfer is between Terry and Hung. Terry's board is an FOne 230 in the foreground (Carabete Jan 1999).

Ben Merkenhof with his kiteboard. The FOne foil is behind Ben. (Adelaide, Australia May 1999).

Other boards. Yes, we did have bidirectional board in Australia back in 1999! (Adelaide, Australia May 1999) 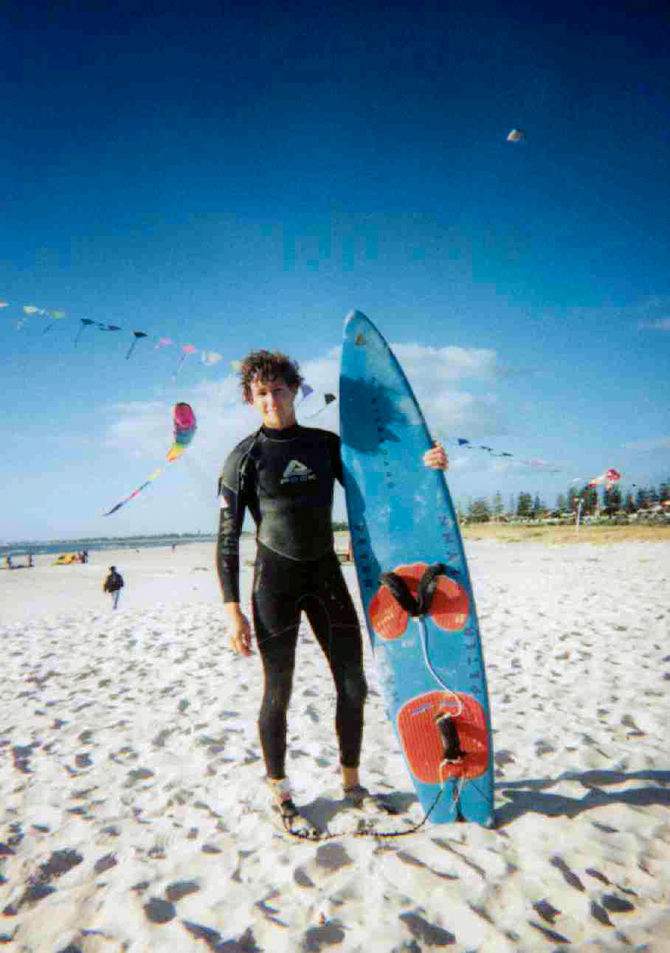 Kane Hartill with his Peter Lynn board (Adelaide, Australia May 1999).

Ian Young with his WinDesigns boards (Adelaide, Australia May 1999).

Hung and Mikael Lanoe at Cherry Beach, Toronto summer 2000 (Hung's legendary XXXL is in the back ground. Mike started kitesurfing this summer)

Shannon Best is in white T-shirt

We have been kiting in Ottawa since the last millennium! Given the easy access to water and snow right in the city, Ottawa is the catalyst for the formation of kiting pioneers in various aspects of kite sports.
Read More

There have been known fatal accidents while kitesurfing so for all disciplines of kiting, safety has to be taken seriously. Please make sure you have read and understood safety page before getting into kiting.
Read More

Ottawa Kiting assumes no responsibility for the accuracy of this information. Use the information contained herein at your own risk. The owners, webmasters, authors and contributors are not responsible for any loss or accident to you or to other third parties including loss of business, loss of sale, equipment or property damage, injury or death resulting from you or other third parties using the information contained herein