From the NCC's Winterlude web site:

"Every February, Canada's Capital Region is host to Winterlude, North America's greatest winter celebration. Three fun-filled weekends of excitement and activity await the whole family! From spectacular ice carvings to an amazing playground made of snow, Winterlude is a great way to take in the best of our Canadian winter.

Skate on the world's largest skating rink right in the heart of Ottawa! Marvel at majestic snow sculptures and glittering ice sculptures or groove to energetic rhythms at Snowbowl. Our mascots, the Ice Hog Family, are waiting for you in Canada's Capital Region, from February 3 to February 19, 2006.

Following the success of the 2005 Winterlude Kite Demonstration event, the school Kitesurfingschool.org Ottawa (VL Kites) and the NCC again teamed up to organize a kite demonstration event for Winterlude 2006 on Feb 11 and 12. Again, this is the world first large scale winter kite demonstration event for a very large number of non-kiter audiences, fully insured with $2,000,000 public liability insurance. Due to the large number of surrounding audiences, only instructors or riders with more than 3-year experiences were invited to ride in the event.

The main objectives of the event are to:

The event was fully supported by the kite manufacturers and the kite magazines. Many kite manufacturers and magazines have contacted Kitesurfingschool.org, and in the end, BestKiteboarding (http://www.bestkiteboarding.com) has sponsored 4 riders by sending 3 BFK kites and 1 newly released Waroo kite for the riders to use during the event (then to keep afterward) and SBC Kiteboard Magazine sent two boxes of Kiteboard magazine to be distributed to the audiences. Many thanks to BestKiteboarding and SBC Kiteboard Magazine for recognizing the important of the Winterlude Kite Demonstration Event in the promotion of the sport and sponsoring the school as well as the riders.

Even thought we normally have very good wind around here in the winter, the wind was not very cooperative on Saturday and somewhat OK on Sunday. This year, NCC made a mistake of over-plowing the demonstration area so it was smaller than last year but large enough for a couple kiters. Due to lack of new snow, snowboards were not very desirable but doable. Thanks to the experienced team and the cooperation of the wind on Sunday, we managed to demonstrate all aspects of winter kiting: kiteskiing, kitesnowboarding, kiteskating, kitesnowblading, kitetelemarking with skis, snowboards, skates, snowblade and telemark skis respectively. The riders have done an admirable job and have really impressed the skaters. Some riders have managed to boost some good airs given the non-ideal condition and that has quite motivated the audiences. The event was a major success - we have managed to demonstrate all form of standing up winter kiting - if you know of some others, let us know and we'll try to do it next year.

Furthermore, this year, the Canadian national CTV station crew filmed Claude kitesnowblading, Hung kitesnowboarding, interviewed Brent and we made it to the TV news coverage at 6:00 PM and 11:00 PM EST

Many of the audiences (skaters), came from all across Canada and Northern US:

Arrived at Kite Camp early in the morning, Claude and Paul unloaded the truck. We used this same Tahoe LX 4x4 on sand as well as snow and ice

Brent and Claude already in riders' T-shirts pumped up the BFK. We used this same Tahoe LX 4x4 on sand as well as snow and ice. Hung was in the background

Kites were ready and placed around Kite Camp.

The Giant Tiger carnival train passed by the Kite Camp

The Kite Demo is ON! Claude showed how to kitesnowblade with the BFK

Claude switched to the Waroo

Paul showed how to kiteski with the Waroo while Brent Watched

Not enough power with the Waroo, Paul came back with the BFK

Peter showed how to fly the Waroo

World class Kitetelemarking in front of the crowd. Brent won the heart of the lonely lady in the foreground!

Lady, can you kite with this on ice? 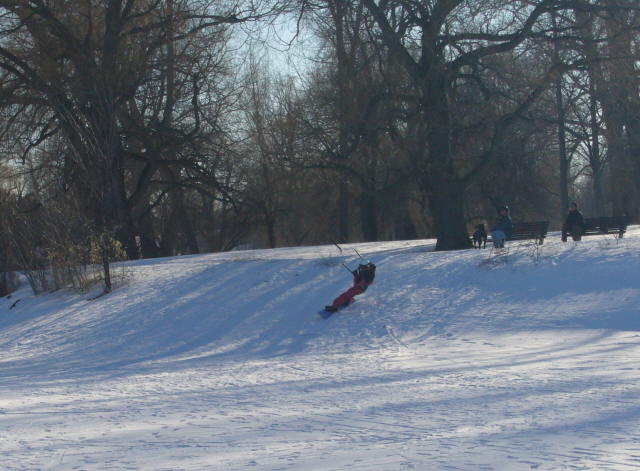 Hung rode the frozen wave while 2 audiences watched from the nearby bench (don't get that kite in the tree Hung!)

That's all for Winterlude 2006 Kite Demonstration folks. We'll be back next year!

Next year, watch out for this young kitesnowboarder.....

We have been kiting in Ottawa since the last millennium! Given the easy access to water and snow right in the city, Ottawa is the catalyst for the formation of kiting pioneers in various aspects of kite sports.
Read More

There have been known fatal accidents while kitesurfing so for all disciplines of kiting, safety has to be taken seriously. Please make sure you have read and understood safety page before getting into kiting.
Read More

Ottawa Kiting assumes no responsibility for the accuracy of this information. Use the information contained herein at your own risk. The owners, webmasters, authors and contributors are not responsible for any loss or accident to you or to other third parties including loss of business, loss of sale, equipment or property damage, injury or death resulting from you or other third parties using the information contained herein